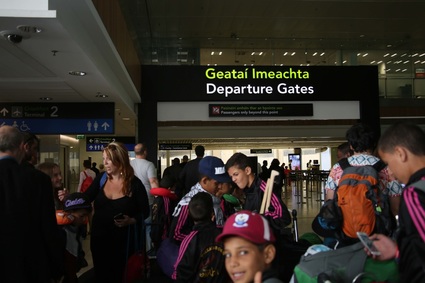 
A wrap-up statement on the kids’ visit for all of you who have done so much over the last two weeks, and before that!
This stage of the Gaza Kids to Ireland project has drawn to a close with the group’s safe arrival home – to a rapturous reception in Gaza that underlines the importance of their journey.
The initiative, long in the making and supported financially and logistically by many groups and individuals, has been a real success, full of fun and football. The warmth and solidarity shown to our visitors by thousands of people all over Ireland has been overwhelming: they met a huge welcome wherever they went. Indeed, we could have brought them to every county in Ireland, such was the interest in and enthusiasm for their visit.
Bringing the group from Al Helal football academy was always going to be complicated, but it became really onerous due to obstacles Israel put in our path.
Initially a group of 22 travellers was due to arrive in Ireland for a 12-day visit on July 13th, flying from Amman, Jordan, via Istanbul; but their permits to leave the besieged Gaza strip weren’t granted by Israel, necessitating the postponement of the programme. When the permits were finally granted in late July, we had to try to reschedule everything very late, for a shorter visit – July 29th to August 8th.
Worse than the delay was the cruel refusal to issue permits to the entire group. One child from the group of 15 players, 13-year-old Karam Zidan, was prevented from travelling to Ireland, as were five of the seven adults due to travel: two coaches, a journalist, an administrator and the only woman, a specialist in children’s mental health.
Apart from the sad blow this represented for us and them, having just two adults with 14 children who had never before left Gaza, and who spoke very little English, made things very tough. If Israeli authorities intended to cause maximum disruption to the project by this decision, they very nearly succeeded. However, the travellers and those left behind decided the trip should go ahead; and due to the brilliance, kindness and boundless energy of Al Helal chairman Ayed Abu Ramadan and coach Moammed Alrawagh, alongside the voluntary efforts of many people in Ireland, the kids had constant support. We were also very lucky that Azeez Yusuff from Sport Against Racism Ireland (SARI) joined us for the duration of the trip, as a coach, mentor and friend.
Those prevented from travelling were never far from our thoughts, especially Karam. He was wounded in the 2009 attack on Gaza, so it seems likely the apartheid state didn’t want people in Ireland to hear about his injuries. Left behind, however, he was an even more vivid reminder of what was done to him, and what is done to thousands of other Palestinian children, by Israel. “We are all Karam” was a constant refrain.
The kids from Al Helal football academy played games against Ballybrack FC, Kinvara United, Nenagh AFC, Nenagh Celtic and Pike Rovers (and beat them all!). They were also guests of Galway United for their league win over Dundalk – that night, the boys were the guard of honour, played on the pitch at half-time and met the President of Ireland, Michael D. Higgins!
The Palestinian Community in Ireland and the Palestinian diplomatic mission here, including Ambassador Ahmad Abdelrazek, were enthusiastic supporters throughout the visit. SARI and Shamrock Rovers helped create a great evening of beach football on Dublin’s Sandymount Strand. Existing organisations such as Nenagh Friends of Palestine, who hosted the children for half their visit, and the Ireland Palestine Solidarity Campaign, in Limerick and elsewhere, were vital to the project; more ad-hoc groups in Ballybrack, Kinvara, Wexford and Sandymount worked quickly and tirelessly to organise events. There weren’t enough mealtimes to visit all the restaurants that offered to feed the children!
Gaza Action Ireland hopes to continue working with Al-Helal and with football in Gaza, including supporting the development of the game for girls in the territory. We hope more visits, in both directions, will become possible.
This grassroots project couldn’t have happened without widespread support for fundraising, organising and hosting. It’s been absolutely brilliant. We couldn’t possibly name them all, but we thank everyone who played, donated, fundraised, fed, and lavished the children with gifts, hospitality and love.