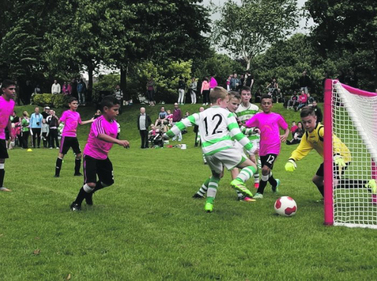 CHILDREN from Palestine’s besieged Gaza Strip got to switch off from the conflict back home and just be children as they togged off for a game of football at the People’s Park in Limerick at the weekend.


​
Under 14s from the Al-Helal Club in Gaza are currently enjoying a fun 10-day visit to Ireland. The young footballers, aged from 10 to 14, visited Limerick and other parts of the country to play a series of matches against local underage clubs.
The ‘Gaza Kids to Ireland’ project is a joint initiative of a number of groups including Gaza Action Ireland. It follows on from a visit to the Al Helal Club in 2013 by Gaza Action Ireland (GAI) members from Limerick and Nenagh and was launched by former manager of the Republic of Ireland, Brian Kerr, and ex Irish rugby international Trevor Hogan in 2014.
According to Limerick-based organiser of the project Zoe Lawlor, it aims to give the kids some relief from the stress of living under blockade and military assault.
​
“We couldn’t be more delighted to have these lovely children finally here to see us,” Gaza Action Ireland (GAI) coordinator Zoë Lawlor said.
‘The situation for Palestinians in Gaza trying to play sports, living as they do under siege, is extremely difficult. The children are hampered by lack of facilities, equipment, places to play and restrictions on their movement. This visit to Ireland will provide a wonderful chance for them to meet other children, experience a new culture and to tell their stories — we have a lot to learn from them,” she added.